Why we chose a celebrant to conduct our wedding ceremony

When we got married back in 2015 there were a few things we knew for certain. One of them was that wherever we got married would have to be dog friendly as our dogs had to be there. The other was that we wanted our ceremony to be conducted by a celebrant. There were loads of reasons why we wanted a celebrant led ceremony rather than one conducted by a registrar. So here, we’re going to share some of the reasons why we chose a celebrant to conduct our wedding ceremony. 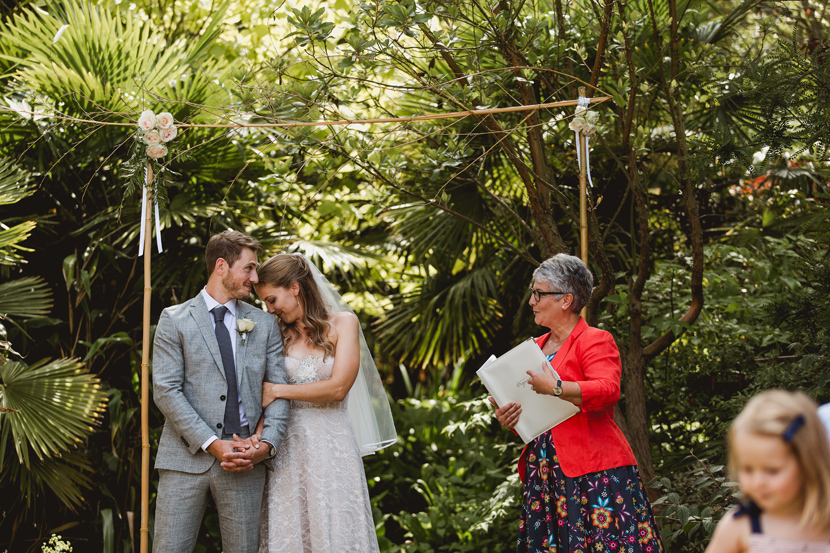 Rebecca Waldron of White Rose ceremonies, above with Hannah & Ty. More from their wedding here

Firstly, we attend weddings most weekends as wedding photographers. We’ve shot over 300 of them now. Although every ceremony is special, hearing the same words repeated over and over again in a work context unfortunately means that it’s hard to find meaning in them when you apply them to your personal life. We both felt it wouldn’t feel real and it wouldn’t feel special if it felt like “another day at the office” so to speak. Celebrant led weddings are completely personalised and are tailored to you, so you will hear something unique that has been created just for you!

We also didn’t want to have to abide by the rules and restrictions of a civil ceremony. The guidelines are fairly strict when it comes to things like religious references for example. Although neither of us are religious and although we didn’t plan to include any religious elements, how strictly this is enforced does vary according to your local office and who ends up conducting your ceremony. We have heard of an instance where a couples chosen song was prohibited for including the word “angels” in it for example. FYI, the song was Robbie Williams, Angels, so hardly a song of worship. Similarly, songs including the words “heaven” and “God” may be disallowed- even if not used in a religious context. Ultimately, we didn’t want it dictated what we could or could not include. 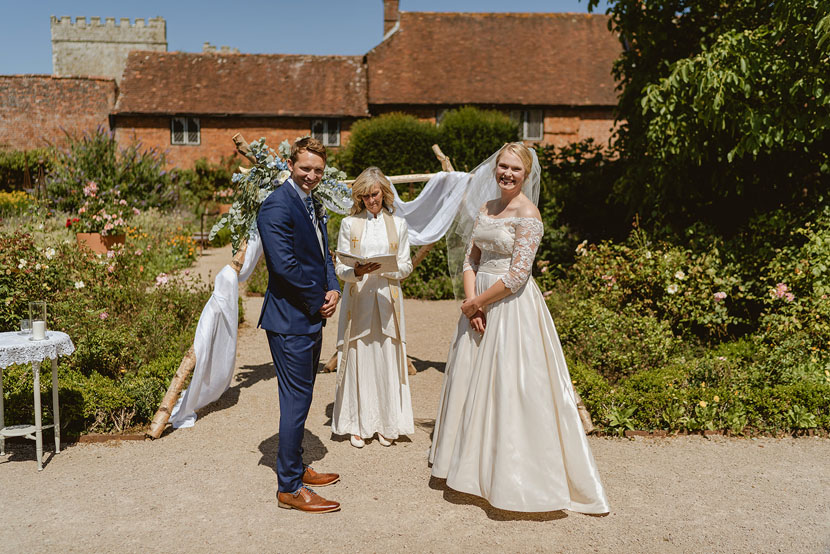 Additionally we didn’t want to have to worry about the other strict restrictions that registrars have to abide by, such as timings. Registrars will conduct several weddings a day. Especially on weekends in summer. We didn’t want to be boxed into a little half an hour time slot with them rushing in and rushing off. A celebrant will (more often than not) only conduct one wedding a day, so they’re there for you when needed. Of course you shouldn’t take the mick with this. Don’t book them for a 3pm ceremony but keep them waiting until 5pm. If you’re running 15 minutes late for reasons beyond your control though, it’s unlikely that they’ll leave. Registrars wont always have that choice if they have other weddings to attend.

We have witnessed strict enforcement of timings more than once with registrars and it isn’t something we wanted for our own day. On one occasion, the bride was running just a couple of minutes behind. The registrars were in such a rush to get on to the next wedding that they literally cut every bit of personalisation from the wedding ceremony with no notice or discussion. No readings or personal vows, just the legal declarations, a ring exchange and the paperwork. For context, on this particular occasion the wedding was scheduled for 2pm. The bride arrived at 2:06pm. The registrars were walking out before 2:20pm. 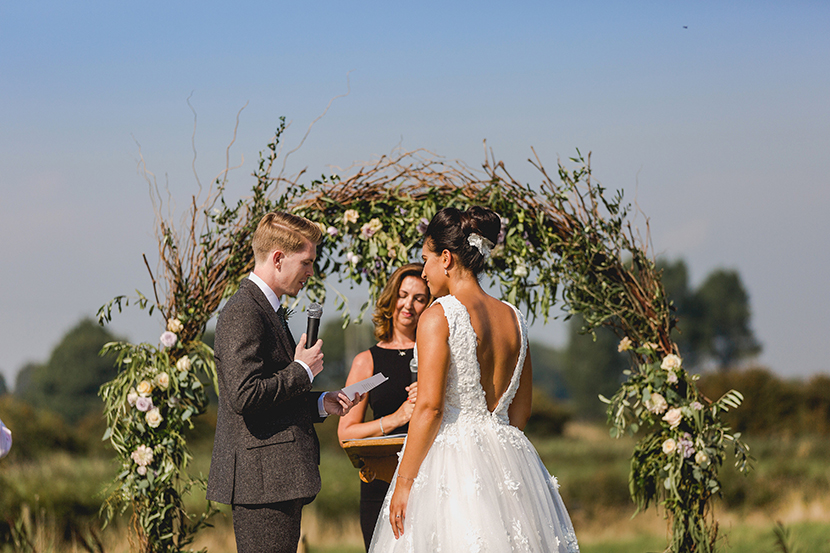 In line with the above, you are kind of bound by the time slots that the registrars have available when you get in touch. If you dreamed of a 2pm wedding but they only have a 4pm opening left, it may seriously impact your plans if you want a traditional running order for example. We wanted the freedom to choose exactly the time we wanted our ceremony to take place, according to when the light would be best.

You know who you’re getting

Another thing that appealed to us was that when you book a celebrant, you know who you’re getting. You get to choose who you’d like to be part of your day. You can choose someone who’s personality and skills match what you’re looking for. With a registrar you wont know who you have until the day when they arrive. We didn’t want a stranger at our wedding.

Celebrants are largely self employed and are therefore self governing in the sense that they’re free to use their own discretion and judgement when it comes to how involved they can be. Usually they have actively chosen this career path and it’s often a passion of theirs. They tend to pride themselves on the job they do and the relationships they build with their couples. They will often gladly match your theme, participate in your flash mob or whatever else it is they have planned. As much as they may want to registrars typically cannot do this as they’re employed by someone else.

With this, also comes the fact that they are available to help with things like sourcing readings, redrafting ceremony scripts and so on. They are forever expanding their knowledge and reference base as it’s their job to provide a complete service and not just deliver a pre-scripted one. This means they can usually present you with more ideas and options too. Such as a hand-fasting ceremony, sand ceremony, or other things you may not have known about or considered. 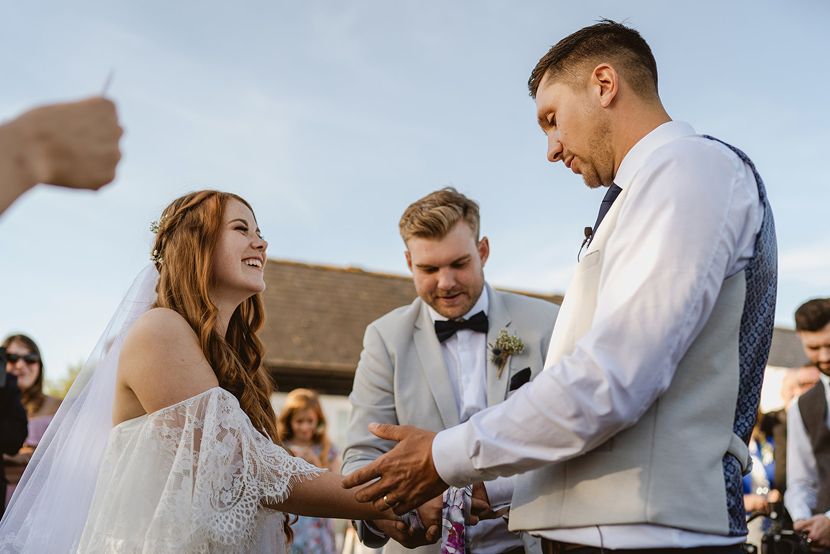 This wasn’t one of the reasons we chose a celebrant led wedding, but it was a nice surprise. After our ceremony we were presented with a copy of our ceremony script in a folder. Something to keep and remember the ceremony by. This was lovely! Of course you have the photographs and perhaps even a video as visual reminders, but to see your ceremony as a script was and is so personal and heartwarming. These extra touches really reinforce the personal aspect.

Summary- Why we chose a celebrant led wedding

For us, ultimately it was about achieving a more personal service over all. We wanted less formality, less restrictions and more personality. We wanted something completely unique and tailored to us. For us, that meant choosing a celebrant led wedding and it is definitely something we would recommend too!